The Microcredit Summit Campaign: A Legacy of Impact, On a Shoestring

This blog was cross-posted from www.grameenfoundation.org. 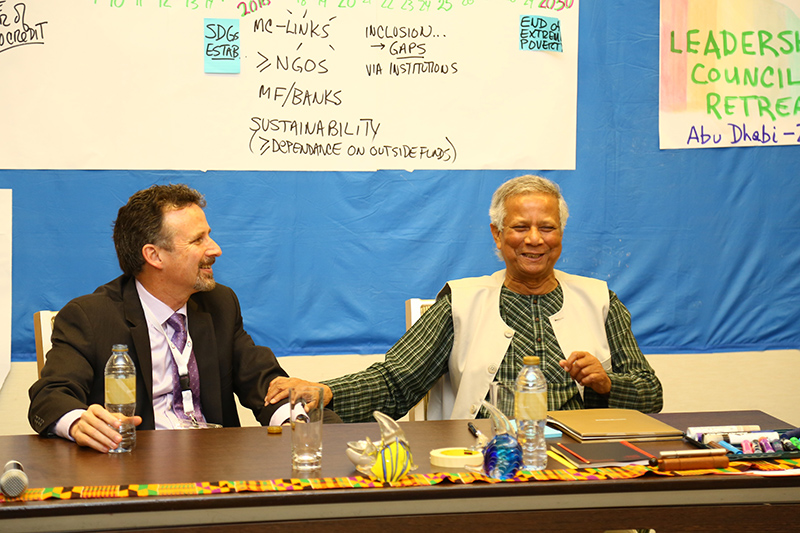 When I sat down with Larry Reed a few weeks back and learned of the significant changes in store for the Microcredit Summit Campaign, two decades of memories were stirred up.  I tried to imagine what the world would be like had the original Microcredit Summit not taken place and even more important, if the Campaign that followed it had been stillborn or less robust.

That world would be one with fewer people having access to financial services, especially among the poorest, and thousands of ideas, debates, partnerships and personal connections grounded in ensuring that those financial services made a positive, lasting impact on the lives of the poor would have been lost.

It would also be a less inclusive and just world, one where civil society’s role at the global level in encouraging governments and the private sector to adopt, adapt and support the best ideas might still be nascent.  Indeed, one of the most powerful legacies of the Campaign is the role of citizen’s movements in pushing governments and businesses worldwide to get behind action on climate change.  In fact, the advocacy model pioneered by the Campaign’s scrappy mother organization, RESULTS, has been applied with stunning success to combat global warming through Citizens Climate Lobby and Citizens Climate Education, whose board of directors I recently joined.

More recently, this deep advocacy work is beginning to take root at Friends Committee on National Legislation, the U.S. Fund for UNICEF, and elsewhere through the work of the Center for Citizen Empowerment and Transformation.  The profoundly positive imprint on society by this small lobbying group and its founder, Sam Daley-Harris, is easy to miss but once recognized, impossible to deny.

The origins of the Microcredit Summit can be found in Sam’s efforts to have world leaders come together to recognize the power and potential of microfinance and set a time-bound, quantifiable goal for expanding its global reach.  When RESULTS began lobbying in 1986 for what was then called “poverty lending” or “microenterprise development,” few outside of international development circles had heard of this novel approach.  Even as late as 1995, the terms “microfinance” and “microcredit” barely existed, and this social innovation had reached meaningful scale in at most three countries (and by today’s standards, nowhere).

The model Sam was advocating was along the lines of the World Summit for Children held in September 1990, which was spearheaded by the late Jim Grant, then the head of UNICEF.  The children’s summit ended up being the largest gathering of heads of state in history up to that point, at which goals for the improvement of the health, education and well-being of the world’s children were adopted, setting 2000 as the target date for achievement.

This approach became the impetus and model for the Millennium Development Goals.  For Sam’s part, he organized candlelight vigils attended by more than one million people a few days before the Summit for Children, in order to create a groundswell of support and a sense of urgency.  Then, his affiliated advocacy chapters around the world lobbied for more funding for programs supportive of the goals.  As the 23 year old legislative director of RESULTS at the time, I worked with chapters around the country to get the World Summit for Children Implementation Act of 1991, and its hundreds of millions of dollars of funding increases for programs supporting children’s well-being, introduced and later incorporated into law.

Sam envisioned a similar process around microfinance, but world leaders were averse to committing publicly to a socio-economic empowerment strategy that at the time was thought by many to only work at scale in a single country: Bangladesh.  So he gave up and decided that civil society would take a more pro-active stance: rather than hold vigils and organize lobbying campaigns in support of government-sponsored conference and goals, it would organize its own process and summit, and invite governments to send their delegations to take part if they were so inclined.

One of the most innovative and exciting aspects of the original Summit and the Campaign that followed it was its inclusiveness.  Not only were practitioners of microfinance and government officials invited, but Councils were created to engage diverse sectors of society in support of the Summit’s goals: higher education, religious institutions, corporations, service clubs and more.  All told, more than 2,900 people attended the February 1997 convening, including five heads of state.  Everyone on earth was invited to join in through one of the Councils, which had the effect of crushing the atomization that usually stymies global movements, and as a result created a nimble, cohesive and decentralized multinational effort instead.

Sam deftly managed the process of writing a Declaration and Plan of Action that were rigorous, forward-looking, inclusive and action-oriented so that everyone could get behind them in principle.  The risk that the process would bog down on arcane debates and petty rivalries was defused.  The centerpiece of the Summit’s agenda was the adoption of the goal of reaching 100 million of the world’s poorest families with microcredit and other financial and business services.  As a result of such a focused target to rally around, everyone came out of this historic meeting with their eyes on the big picture and what they could do to contribute to reaching the goals.  In the months that followed, dozens of new initiatives in support of microfinance were launched – something that became evident when so many ten-year anniversaries were held in 2007 for institutions as diverse as Grameen Foundation and the Deutsche Bank Microcredit Development Fund.

Over the course of the next twenty years, the Campaign operated on a shoestring budget but with great moral clarity about what I believe to be the highest purpose of microfinance: contributing to the elimination of poverty.  It absorbed lots of criticism, some more fair than others, for its strong and unequivocal stands on critical issues.  As a result, it helped shape the evolution of a movement that was being pulled in many different directions by grassroots practitioners, global financial institutions, populist governments, skeptical academics, muck-raking journalists, supporters and critics on the left and right, wary as well as helpful regulators, and many others.  Indeed, the very existence of this ecosystem owes itself in large part to the Campaign’s efforts.  Talk about punching above your weight!

When the original goal of the Summit was reached in 2006 and celebrated at the Campaign’s meeting in Halifax, Nova Scotia along with the announcement of Professor Muhammad Yunus and the Grameen Bank sharing the Nobel Peace Prize that same year – surely not a coincidence – it was not entirely clear what would be next for this movement.  Admirably, the Campaign commissioned Grameen Foundation to write a comprehensive evaluation of the Campaign with recommendations for the future.  This was authored by our Board Chair at the time, Susan Davis, along with our supporter Vinod Khosla (also a legendary Silicon Valley venture capitalist), and ably assisted by Brooke Ricalde, then a graduate student at Stanford University, and by me.

With these recommendations in hand, the Campaign made some of its most important contributions to international development in its second decade of existence.  These include focusing on the measurability of poverty reduction in the context of microfinance, launching and hosting the Truelift certification and learning initiative, holding important and influential debates about the ethics of earning large profits from microfinance, bringing the self-help group and microfinance communities together, and modeling a positive leadership succession in 2011 with the appointment of Larry Reed to take over for Sam.   Indeed, Larry’s closing speech at the Valladolid Summit, which ushered in his time leading the Campaign, was about the finest I have ever heard delivered on the topic of microfinance, or on any other subject, for that matter.

Under Larry’s energetic and at times inspired leadership, many things changed, but the core ideals and methods of the Campaign reassuringly endured.  One of the most significant contributions during both Sam and Larry’s stewardship was serving as a talent incubator for the microfinance and international development industries.  If you check out the resumes of some of the most impressive professionals in these fields who are now in their 30s and 40s, you will likely find a stint at the Campaign as underpaid and overworked interns, staff members, or volunteers.  Examples include Kate Druschel Griffin, Jacki Lippman, Nathanael Goldberg, Lisa Kuhn, Anna Awimbo, Rob Gailey, Kate McElligott, and Lisa Laegreid Gatti.

I recall a brainstorming session that Sam organized around 2009, where the future of the Campaign was debated.  Susan Davis and I were among those invited to participate.   Susan and I both ended up advocating for the Campaign to work more closely with RESULTS, whose CEO, Joanne Carter, took part as well.  Neither the leadership of these organizations nor the world at large was ready for our ideas yet.  The Campaign had much left to do as essentially a free-standing organization, not least its strong advocacy of pro-poor microfinance in the Arab World which ended in the highly successful Summit in Abu Dhabi this past March.   But now, the time appears right for this consolidation, which was announced recently by Joanne.

When the history of the modern microfinance movement is written, covering its stunning achievements and its troubling excesses, its bold leaders and its anonymous foot-soldiers, I hope that the pivotal role of the Microcredit Summit Campaign over the years 1996-2016 is given the credit it deserves.  What’s more, its influence on other social movements, especially those related to climate change, should be captured, especially as that legacy of impact will continue to ripple out in the years ahead.

Congratulations for a job well done to Sam, Larry, Joanne, and the thousands of people and organizations who contributed to the success of this rag-tag, principled, practical and often under-appreciated institution and movement.  The world’s poor and those who care about their uplift are deeply indebted to you.  The only acceptable form of payment will be accelerating the momentum toward the elimination of poverty by 2030.

From my new perch at the American India Foundation, I intend to work towards zero poverty in India as part of this larger movement, knowing how much I have been shaped by the Microcredit Summit Campaign and its ideals, its people and its achievements.