All the proposed budget cuts in Congress have made the future seem grim, but it is just a matter of perspective. In Georgia, our perspective has led to unity.

In the past week RESULTS partners, ONE members, and friends from Bread for the World worked together and met with staff members from Senator Isakson’s and Senator Chambliss’s offices. In unity, we used our voices to speak on behalf of the world’s poorest people. 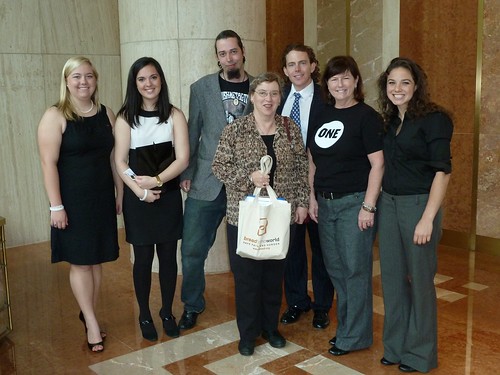 Armed only with passion and knowledge, members of our coalition shared personal stories and experiences. Statistics and facts flowed accurately at both meetings. We presented petitions with thousands of signatures calling for Congress to support the foreign aid budget.

Senator Chambliss received an extra special letter from RESULTS partner Anthony Lawrence Washington, who is also a Navy veteran. With conviction Anthony wrote about his military experience and how it helped him see the benefits of funding foreign aid programs such as, the Global Fund to fight AIDS, Tuberculosis, and Malaria.

Here’s an excerpt from Anthony’s letter:

For every child that is fed, that’s one less father who has to strap a weapon to his chest for a mere two thousand dollars; for every child that is given basic education, that’s one less who will be trained in a terrorist training camp; for everyone who is ill and given medical assistance that’s one less voice that can be handed to the opposition. If you cut the International Affairs Budget, you will harm programs which provide a lifeline for millions. Cutting these lifelines will help to create the very enemies that have killed and maimed my friends, and that too, will not go unnoticed.

Change can only happen when reasonable people agree to sit down and talk with each other. Hopefully this week we made progress in that regard. Hopefully, Georgia’s Senators will realize that this small piece of the pie, the less than 1% of the budget that goes to foreign aid, is truly invaluable.

Thanks to all the organizations, individuals, and staffers who helped make our meetings successful. An extra special thanks to the Congressional aides who took the time to meet with us. Mwah!