The second joint plenary of the day treated us to a session with John Donnelly and Glenn Thomas who presented their work to us on Airborne, a photojournalism project produced by the World Health Organization that looks at drug-resistant TB. John Donnelly is a renowned global health journalist who has previously written for the Boston Globe. Glenn Thomas is the communications officer of the WHO Stop TB Partnership.

Glenn Thomas started by expressing frustration that in a world where we can bailout bankers, it seems terrible that we can’t eliminate this disease of drug-resistant TB that is now in 55 countries.

He spoke about the book, Airborne, which we were all given as a gift at registration. He wanted us to know that the book doesn’t end with the 55 pages. It is a movement. He spoke about how much the project has meant to him personally. Glenn has been working in TB for over five years, but there were still things he didn’t understand until he read them in the book, such as how toxic the drugs are, how much people suffer, and why people stop treatment against their doctors’ orders. To beat this disease is truly a struggle, and this book helps reveal that reality to us.

He wanted to stress two things to us:
1) The importance of stories and images
2) How you tell those stories, especially when so many professional journalists are leaving the industry. 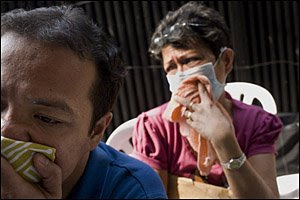 A slideshow of some of the book’s key images and the stories behind them provided a backdrop to the stories he told about the patients and staff he met and captured in the book.

John Donnelly then spoke about the state of newspapers, insisting that they cannot continue with the old strategies, so we need to develop creative new strategies to gt our message out. We must develop our own content. Airborne is a good example of how WHO decided to create something new because their story wasn’t being told in the news. It will be publicized on CNN International World Report and the BBC. He advised us to look beyond op-eds and LTEs. We have to be savvy about blogs. Some concrete suggestions for that are: