2013 poverty data released last September shows more than 45 million Americans are still living in poverty, including over 14 million children. Are lawmakers taking action to address this problem? No. They seem more concerned about enacting costly tax breaks for businesses and cutting services for low-income Americans. These misguided policies present an excellent opportunity to urge policymakers to make ending poverty in America a top priority.

Specifically, important improvements to the Earned Income Tax Credit (EITC) and Child Tax Credit (CTC), which lifted 8.8 million people out of poverty in 2013, are set to expire if Congress doesn’t act. Many in Congress are looking to make corporate tax breaks permanent while ignoring the needs of working families. We must use this opportunity to urge lawmakers to prioritize protecting and expanding the EITC and CTC.

Write a letter to your members of Congress urging them to support using the tax code to address wealth inequality and expand economic mobility in America. Use these talking points for your letter:

Note: To find contact information for members of Congress, visit our Elected Officials page at: http://capwiz.com/results/dbq/officials/. Have limited time? Send off a quick email to Congress using our online action system. For other advocacy tips, check out our Activist Toolkit at https://www.results.org/skills_center/activist_toolkit/.

EITC and CTC Need Your “Grassroots Muscle” This Year 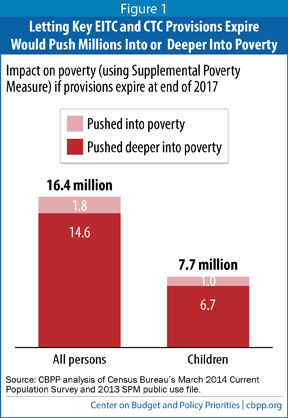 For the past several years, RESULTS volunteers have played a critical role in pushing Congress to protect and strengthen the EITC and the Child Tax Credit – providing “grassroots muscle” to protect these key provisions for low-income working families. In 2009, Congress expanded the Earned Income Tax Credit (EITC) and Child Tax Credit (CTC) provisions for low-income working families for five years. These critical provisions ensure that low-income working families making under $14,000 can claim a partial CTC, and increase the EITC for married couples and larger families. In 2012, Congress passed a huge tax bill that made many expiring tax breaks for the wealthy and middle class permanent, but they only temporarily extended the EITC and CTC improvements. These improvements will expire in 2017 and our moment to act is now! If we fail to make the EITC and CTC provisions the centerpiece of any tax legislation this year, we may lose our best if not only opportunity to make these provisions permanent before 2017.

We Need to Talk about Tax Fairness

While 2017 may seem far away, the House of Representatives is moving legislation to make expiring corporate tax provisions permanent and enacting new tax cuts for the wealthy. For example, they recently passed a complete repeal of the federal estate tax, which affects only the wealthiest 0.3 percent of estates at a cost of over $270 billion in the next decade. Not only do these tax breaks hurt our ability to fund SNAP, Medicare, Medicaid and medical research, improve schools, and rebuild roads and bridge, they further exacerbate wealth inequality in this country and make it harder for average Americans to make ends meet. With wages low and the wealth gap higher than ever, income and wealth inequality is taking its toll on the American Dream. The idea that if you work hard enough and play by the rules you’ll make it is under threat.

To be frank, corporations and the wealthiest people in our country have received huge tax breaks in the past 15 years; we literally can’t afford to keep giving tax cuts to those who need it least. To try to balance the budget, Congress just finalized a budget agreement that slashes $5 trillion, mostly from services and benefits that help working families.  Due to your hard work, they do not put cuts to SNAP on a “fast track”, but this budget could still be devastating for millions of Americans struggling to make ends meet. The final budget blueprint relies entirely on massive spending cuts, with no new revenue. We need to change the broader conversation.

Using a specific request such as making the EITC and CTC improvements permanent will both push us closer to this much-needed policy change and highlight the imbalance of who benefits from current U.S. tax policy. In the coming months, we will dive deeper into why tax fairness matters and understanding wealth inequality, especially the racial wealth gap, while we focus our specific policy “ask” on protecting and expanding the EITC and CTC. With a presidential election only 18 months away and a growing desire to reform the tax code in Congress, many voices will be weighing in on tax fairness. Many will call for more of the same or worse, expanding the imbalance. We have to be there to provide a better alternative and push the tax fairness message with Congress. This month, we are going to get that conversation started.

Copy, paste, and send the following paragraph in an e-mail to your local action networks

Leaders in Congress are working to enact more tax breaks for big corporations and wealthy individuals. Meanwhile, millions of working families face an uncertain financial future. Critical improvements to the Earned Income Tax Credit (EITC) and Child Tax Credit (CTC) – two of our most effective tools for ending poverty – will soon expire. If Congress allows that to happen, 16 million people, including 8 million children, will fall into or deeper into poverty. Tell Congress to put working families first. Use the RESULTS online tax credit action to urge lawmakers to permanently extend the EITC and CTC improvements now!