RESULTS Chicago volunteer Cindy Levin is headed to Uganda with our friends at [email protected] Follow her story! 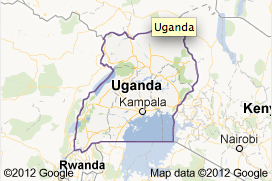 Sometimes when I’m not confident about going somewhere new, I feel better if I research a little, so I have some bit of knowledge to cling to. So while we’re waiting for the trip, let’s learn a little bit about Uganda, shall we?
Let’s see. Uganda is a country in East Africa bordered on the east byKenya, on the north by South Sudan, on the west by the Democratic Republic of the Congo, on the southwest by Rwanda, and on the south by Tanzania.

We’re travelling to the capital city of Kampala and some rural areas. The official languages are English and Swahili as it formerly ruled by the British, but I’m told that there are many, many rural dialects.

Let’s look up some health info since that’s what this trip is about. My UNICEF data is a little old (from 2009), but we can still get a picture. Seems like the “Book of Mormon” Broadway musical lyrics are quite wrong on the national scale (“80% of us have AIDS” – Mafala Hatimbi in the song “Hasa Diga Ebowai”) as it’s really 6.5% of adults 15-49 that are HIV positive. I’ll make a note not to go to fictional communities invented by Matt Stone and Trey Parker, but still 6.5% is not something Americans are even equipped to think about in our country.

I’m encouraged that 90% of male youth 15-24 yrs are literate and disappointed – but not surprised – that girls of the same age have an 85% literacy rate.
What does UNICEF want us to know about mothers and children? Here’s a snapshot.

Is there any good news? Yes.

Sometimes statistics wash over us, even when they are just a few cherry-picked bullet points. But that’s what this trip is about: to take 9 American mothers to gather stories and pictures that put a human face on this kind of crushing extreme poverty. We can’t all go to Africa…heck, I’ve been trying to find a way to go for about a decade…but you are welcome to come on this trip with me vicariously. I hope there is something in this trip that breaks through the numbers and inspires you to get more involved and engaged on this quest to save lives.

In the last 30 years, we’ve gone from 42,000 kids dying each day from treatable or preventable diseases down to 20,000 a day. World population has risen and a global economy collapsed during this time. So, why did the number decrease? That only happened because caring people donated and advocated. And we need to keep going. Because the hardest to reach kids are slipping through our fingers. We need to be smarter, more insistent, and more persistent to get to those children separated from us by geography, war, and famine. Please visit www.shotatlife.org to learn more about investing in a healthier world by immunizing children globally.

You can also donate by visiting my fundraising site for [email protected] at http://www.crowdrise.com/shotlife/fundraiser/cindylevin if you are inspired by our journey. Thank you for coming along.